Never mind the Hacienda and the Warehouse Project, the world’s first DJ came from Bury New Road and in 1909 drew huge crowds to hear his records in Heaton Park and beyond...

Who Is It? William Grimshaw

What is he known for? Being the world’s first DJ, taking a massive gramophone with a giant horn to Heaton Park in 1909, and playing a record of Caruso for 40,000 people. The papers at the time wrote that it was the ‘largest concert in the world’. Later he took his ‘disco’ to lots of other parks in the surrounding Lancashire area, including the Winter Gardens in Blackpool. 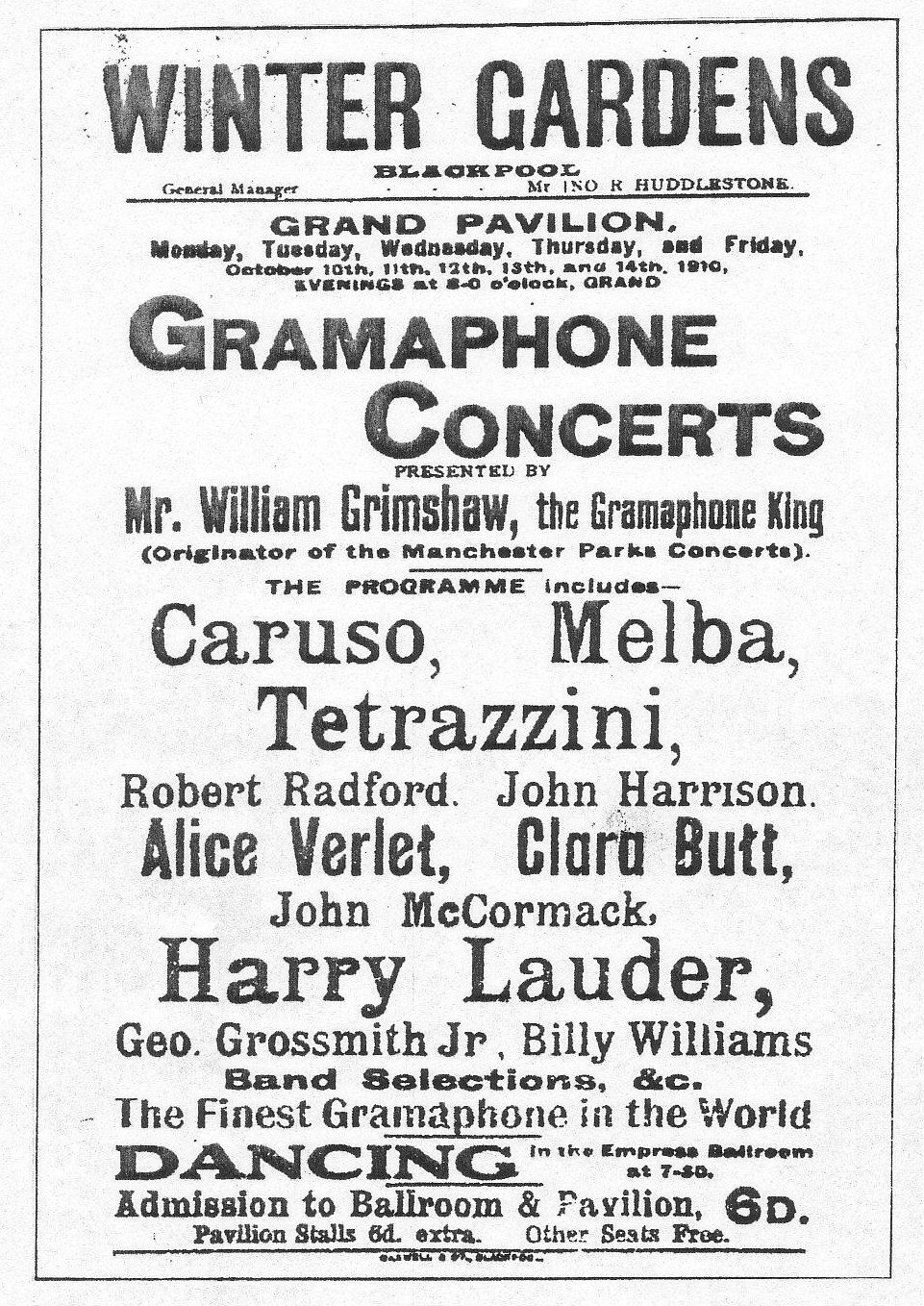 What Did He Change? Everything! In the words of William Grimshaw’s great grand-daughter, Susan Cahal…“The concerts gave the public the experience of listening to a variety of classical music in a relaxed and informal setting which demonstrated that the music was available for everyone to enjoy and not just those who could afford to pay to listen. For many people it would have been the first opportunity to appreciate being able to listen to the music.”

What Was He Doing On Bury New Road?

William Grimshaw had his gramophone shop, which also sold bicycles, on Bury New Road, in Prestwich Village where the Tower Buildings were and Farm Foods is now. 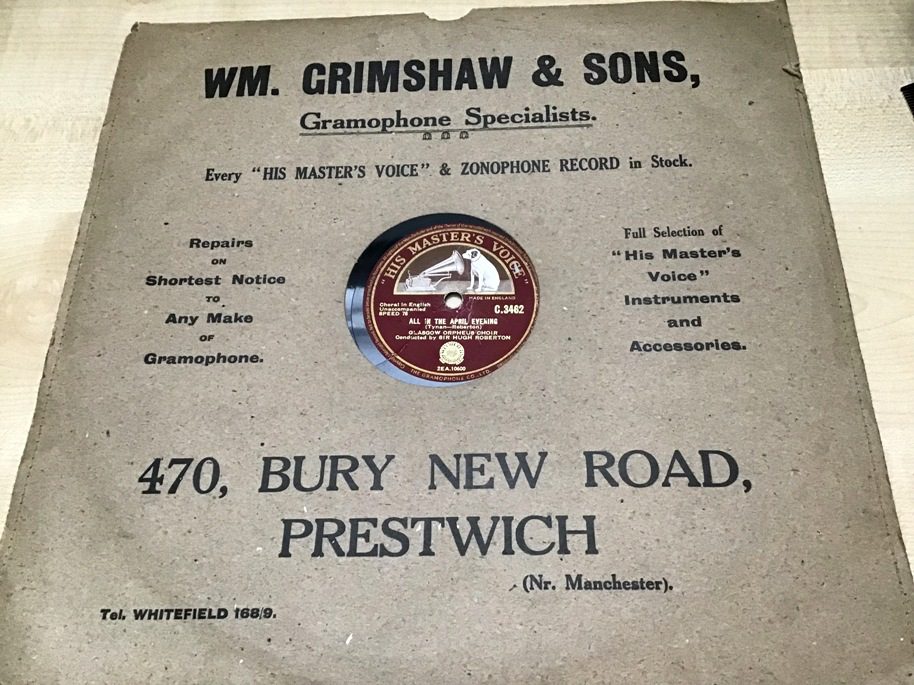 How important was he? William Grimshaw was the first to hold gramophone concerts in the public parks around Manchester, and he was anointed the ‘Gramophone King’. He had seen famous Italian tenor Enrico Caruso perform live at the Free Trade Hall, where only the well connected and rich could get tickets, and wanted to share the experience with those who couldn’t be there. 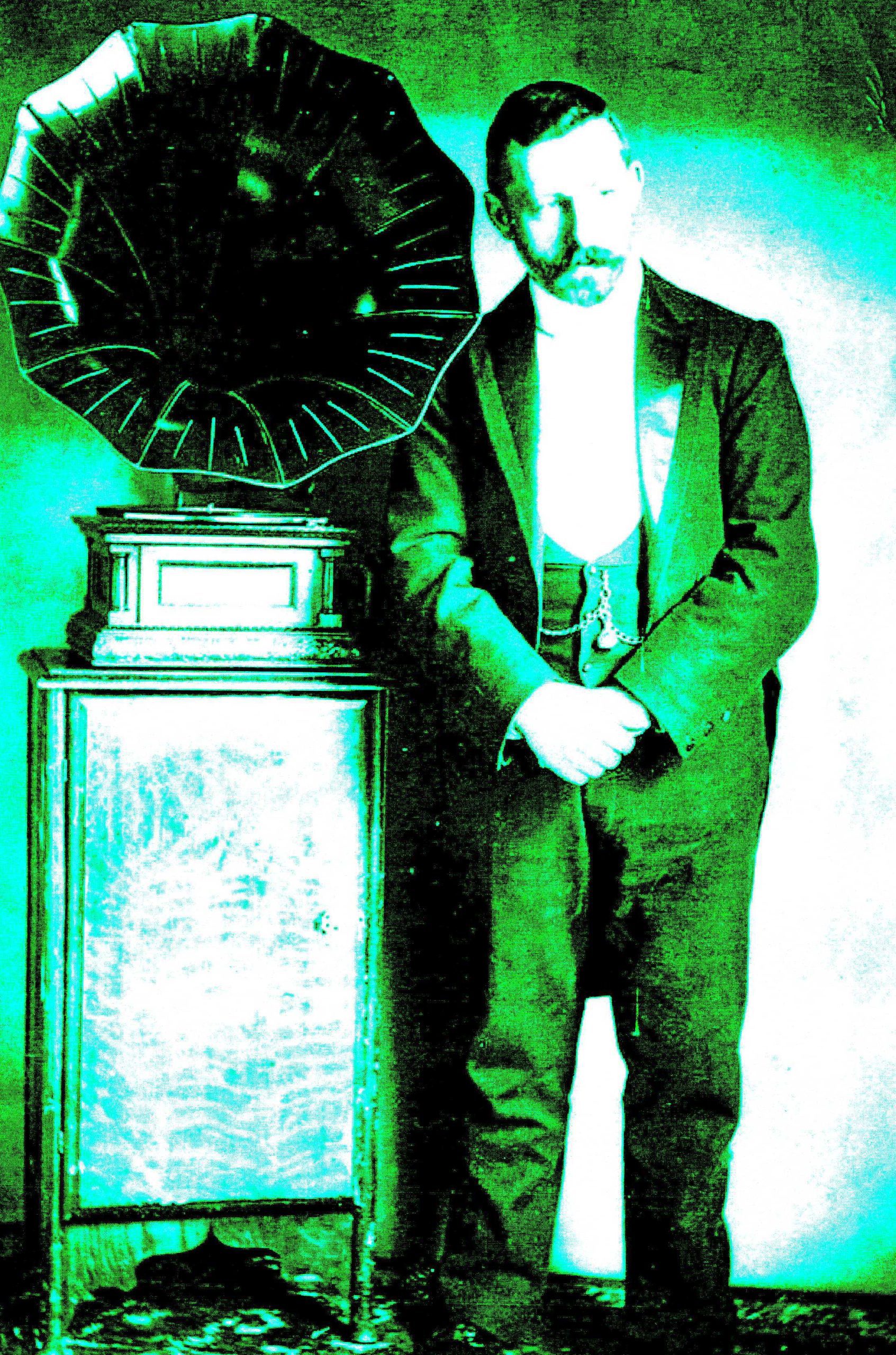 “He told Manchester Corporation in 1907 that an extra large horn would enable crowds of people who could not afford a machine of their own to hear in the open air a wide range of music which was becoming available on records” she adds “The Parks Committee paid him the equivalent of £1.15 in today’s terms for each concert. They were delighted to discover that the concerts were attracting listeners in very large numbers.

“In the concert season of1909 he held 37 concerts” she says “His greatest success was on Sunday 19th September of that year. The concert on that date drew crowds of 40,000 and included in the crowd was Enrico Caruso who had travelled from Manchester where he was staying at the Midland Hotel to hear the concert.  He was so pleased with the concert that he wrote to William saying he had been in the audience and sent him a signed caricature of himself.”

The Prestwich and Heaton Park Guardian reported that the audience “remained as if spellbound from the moment of arrival to the close of the programme, which, it is hardly necessary to say, was intensely enjoyed…” 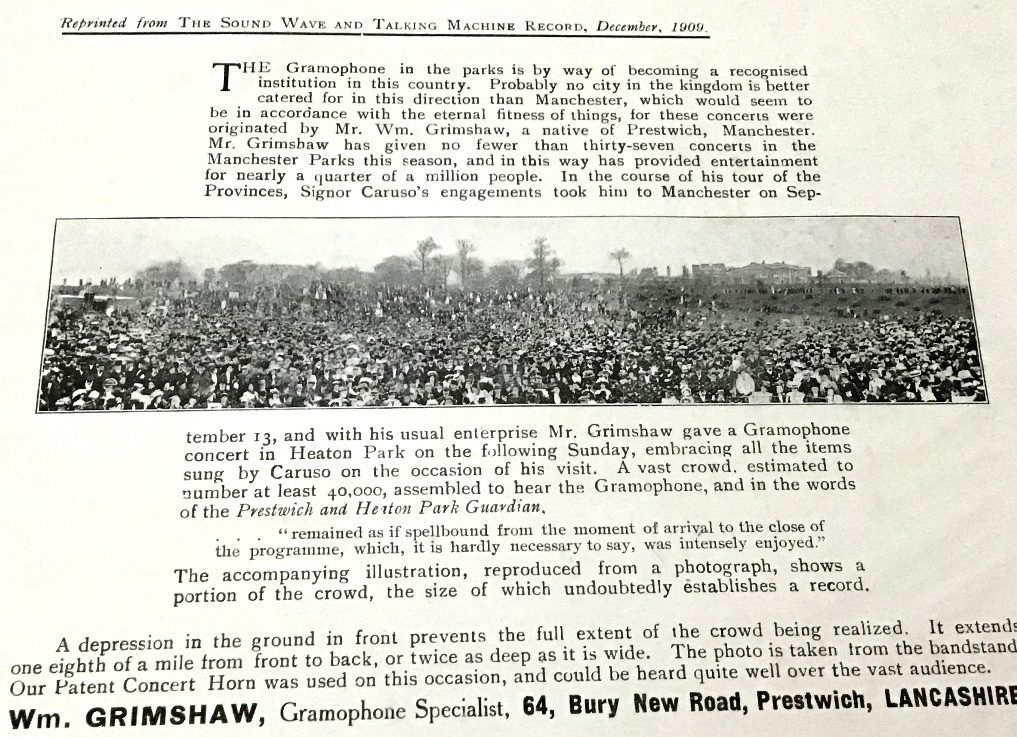 In addition to William Grimshaw putting on concerts for the public he also gave the land on The Heys which became known as Grimshaw’s Playing Field and paid for a slide in St Mary’s Playing Fields. The family car business, Grimshaw’s, was sited on the junction of Bury New Road and Fairfax Road.

William Grimshaw is buried in the churchyard at St Mary’s Church at the bottom of Church Lane, Prestwich… 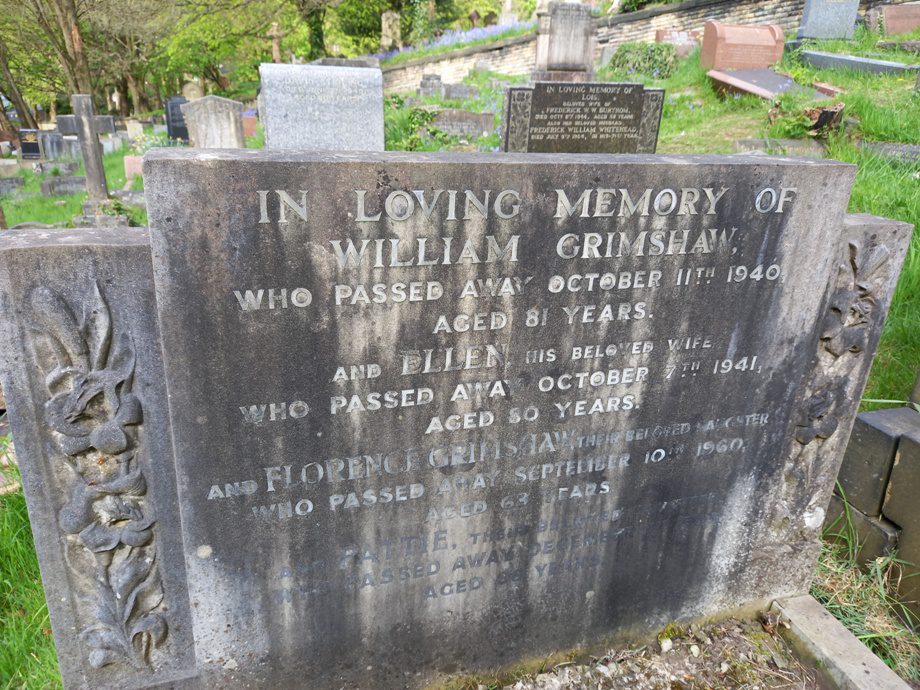 William Grimshaw was lauded by Michael Portillo in his Great Railway Journeys, which included a trip to Heaton Park – see a clip from the programme here… 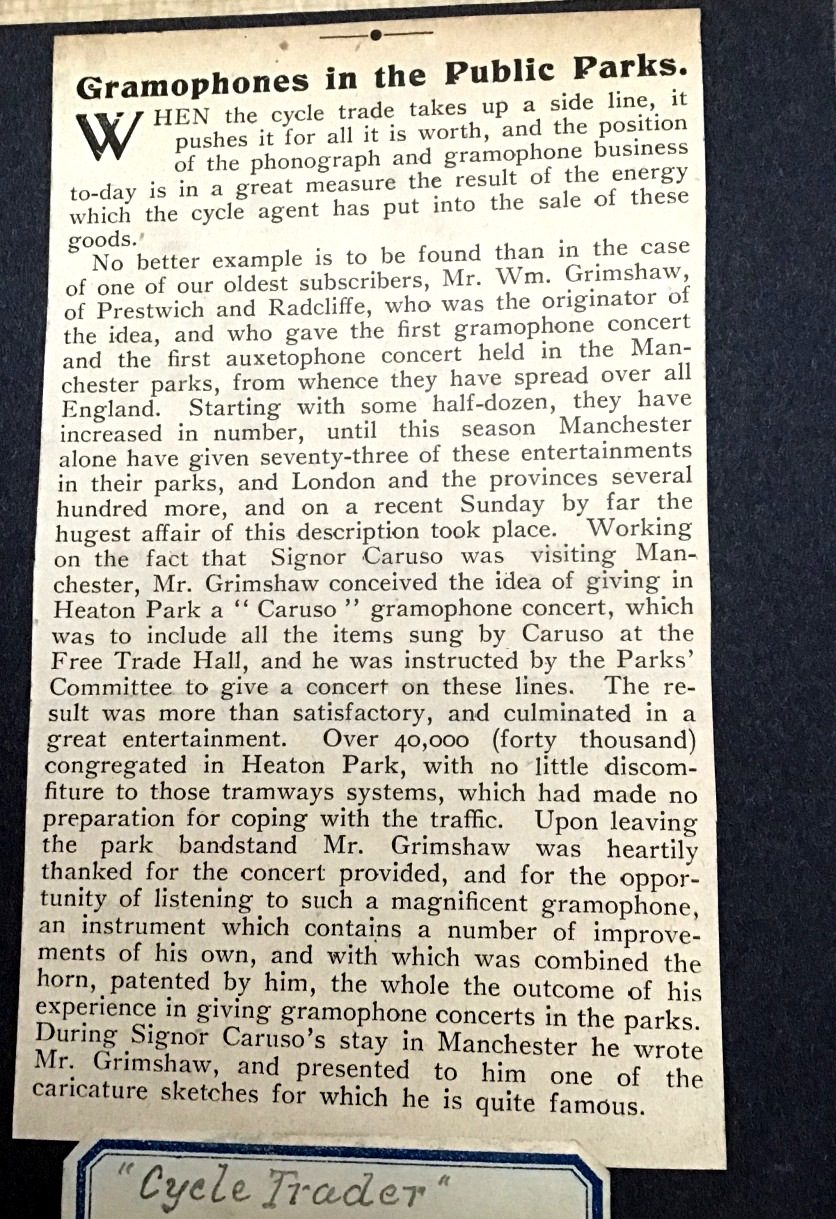