Morrissey on the Strangeways Here We Come Album

Exclusive, never published interview with Morrissey from 1987 on the Strangeways album...

In 1987, just before The Smiths announced that they were splitting up, Morrissey gave an interview about the Strangeways Here We Come album, of which extracts are published here for the very first time…

So why is the album titled Strangeways Here We Come? Is it just because the name sounds nice?

Morrissey: No, not because the name’s nice. I am obsessed with Manchester, I always have been: Manchester history in every conceivable way, I mean, I even like really old Manchester groups like Hermans Hermits, they were very important to me and still are in fact. I certainly love Manchester, I can’t deny that. It’s a very special place, very different and the people are very different too, quite unique for good reasons and bad reasons. We won’t talk about the bad reasons!

People who live in the south haven’t a clue about Manchester. I mean, you go to a place like Bath and they just don’t know what Manchester is at all…there is this great idea of Manchester as being a place of total doom, defeat, despair and depression – which is half true, can we deny it?…There are very strong unsavoury views that lots of people have in the south – that the weather is terrible, Coronation Street – but for me these are the positive things about Manchester; not quite!

What is the significance of East of Eden actor Richard Davalos on the cover of the Strangeways album?

Morrissey: Nothing dramatic. I’ve had the picture for a very long time and, like most pictures that appear on The Smiths albums I just find it very evocative. They speak to me in some mystical way, so I just put them on the record.

The single from the album, Girlfriend In A Coma, is kind of morbid with a bouncy Eurovision feel?

Morrissey: The word ‘coma’ is obviously underused and morbid – it doesn’t frequent, for instance, the Top 40, so people think it’s a very touchy subject. But I don’t think it is, I think it’s a very jolly pop record really; I can hear it on the radio.

Do you think people are going to say…

Morrissey: Yes I do think people are going to say. I think they always do, regardless of what the song’s about. When Ask was released that was very lyrically, not ineffectual, but it certainly wasn’t controversial, yet people still said strong things about it, so I think they always will. They always feel obliged to say something quite detrimental.

Morrissey: I think it’s the general overall image of The Smiths, which is not to be trusted I find by daytime radio DJs.

You don’t come across as a depressing person?

Morrissey: Well I try to fight it but there it is none-the-less. I think it’s just a very  initial surface opinion. People see words like ‘coma’ and ‘miserable’ and they just make a very rash and concrete decision about the group and it stuck quite strongly. But also because I think that the language is not very typical and overtly trivial, and therefore it’s quite serious I find.

Yet people get up and dance to these quite morbid lyrics…

Morrissey: I do believe that happens and yes it is very, very funny. And in a live situation when everybody begins to sing and it sounds really celebratory the way they sing it…like a football chant but the words are like, I don’t know, very real words, and they sing it in a very jovial way, like ‘Here’s the chorus, let’s all join in’. To me it’s very odd when I hear a thousand people sing ‘Heaven Knows I’m Miserable Now’ – it’s never happened before!

Are any of the lyrics tongue in cheek?

Morrissey: Yes, occasionally, but they’re not like so many people say to me, self parody…but there are many throwaway gestures if you like.

Can we talk about Paint A Vulgar Picture?

Morrissey: I’m very proud of that…

Is there not a contradiction there because the lyrics state…‘Re-issue! Re-package! Re-package! Re-evaluate the songs Double-pack with a photograph Extra track (and a tacky badge)’…yet the press release for the album goes on about extra tracks etc?

Can you talk about the split with Rough Trade and the signing to EMI?

Morrissey: Yes, I think the people complaining are silly; they are a little bit too purist and I’ve not really heard a good argument. We signed the EMI contract a year ago so already to me it’s over discussed and over documented, and a lot of people write to me and say ‘Why have you done this? It won’t be the same again’ and so on but I just get annoyed because you should really believe that we know what we’re doing; we’re sensible people. Do you buy the label or the vinyl? I don’t believe that people come to see The Smiths because they’re on Rough Trade.

I don’t have a clear view of how people see The Smiths and the development of The Smiths. I mean, to me each record gets better. I listen to the recent stuff, and I can see lots of blemishes in the early stuff, even though lots of people say to me that the early stuff means more to people. But not really to me. There is a great pocket of Smiths audience who read Smash Hits and who really like poppy things..and there’s a huge batch of people who are very serious and very political, and who see it as some kind of great religious movement, and anything that hints of popularity they despise. You just try and do everything and do your best.

Do you get people trying to psychoanalyse you?

Morrissey: Yes, but most of the time they’re wrong in the things that they write and a lot of the time it’s quite hurtful and it does make me out to be a kind of hysterical crank. But I suppose that’s the risk you take when you write lyrics that might be considered quite personal.

But that’s not to say that you’re quite jolly in your own right?

Morrissey: No, not at all, I’m hilarious, all the time. No, I’m capable of laughter, things like that…

Your lyrics are not esoteric, and quite accessible?

Morrissey: The language is very basic; there’s no words, for example, that people wouldn’t understand…

You don’t quote Dostoevsky, and stuff?

Morrissey: I can’t even pronounce it! I think the lyrics speak for now; they are very 1987, more so than words being written by anyone else. And I think that’s important to be very reflective of how people are really living. I want them to be read.

There are rumours that the band are splitting up…

Morrissey: I’m not really sure where they came from to begin with and I find it very interesting. I’d be very interested to hear what the next rumour is but I really don’t have anything to say. Yes, the band’s very happy – we all think that this next LP is the best record we’ve ever made. I can’t really see anything but relentless joy…I feel like I’m building a little world. It’s like building your own house and it’s a nice feeling, certainly happier than ever before; I can only say that. There’s certainly more things and situations I’d quite like, as with everybody surely but, yes, I’m more happier than ever…. 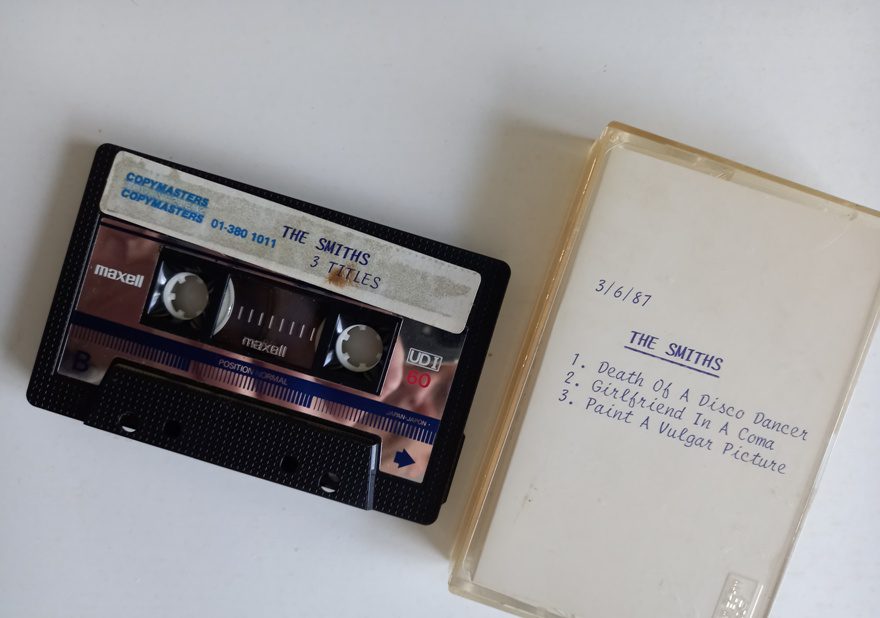 The Smiths – Who Were They? How Important Were They? What Were They Doing On Bury New Road? click here