How The Strangeways Nazis Were Halted in the Late 1970s

Strangeways Prison warders were members of the National Front, so 10,000 people showed up to protest at the start of the Northern Carnival Against Nazis...

What is it? On 15th July 1978, the Anti Nazi League and Rock Against Racism jointly organised the Northern Carnival Against the Nazis, which saw around 10,000 people march from Strangeways to Alexandra Park in Manchester, where a further 25,000 people  gathered to watch bands like the Buzzcocks and Steel Pulse in an afternoon of music, dancing and unity.

Where was it? On a public car park right in front of what was then called Strangeways Prison at the start of Bury New Road.

The prison was arguably the strongest base that the National Front had in any workplace in Britain. Internal Home Office documents from 1975 show that there was concern about the growth of the NF in Strangeways Prison…

“We have known for some time that there is a strong National Front presence in Manchester” writes one Home Office officer, JR Troop from Establishment Division 3, who adds that “membership of the National Front does not in itself infringe rules; only if political views of any colour were allowed to intrude into performance of official duty, would official action be called for…”

He does request that one senior prison officer, Brian Baldwin, who had been taking in the NF newspaper, be told that “he is not free to disseminate his views on official premises this way”…However, in May 1975, Strangeways Prison Governor, AR Moreton, writes to Troop about the NF leaving copies of its paper, Spearhead, in the visitors’ waiting room. Baldwin also tried, unsuccessfully, to book the Manchester Prison Officer’s Club for a political meeting to be addressed by a ‘prominent member of the National Front’.

In October 1975, Joel Barnett MP, receives an anonymous letter from a teacher who writes “Since joining the education department at Strangeways Prison, I have been surprised at the strength of the British Movement and National Front among the officers of the prison…After living through the years of the rise and fall of the Fascists and Nazis, I am depressed to see similarly minded bigots thriving in Government establishments…”

The Guardian newspaper at the time quoted an ex-prisoner of Strangeways who stated that black prisoners at the jail were ‘actively discriminated against’, while prison officers, who had been advised to stop wearing National Front badges on their uniforms, were now wearing them as tie pins…

In 1976, Strangeways Deputy Governor, AJ Greasley, writes to Establishment Division 3 at the Home Office, about articles in the Observer and Guardian revealing the influence of the NF on prison officers… “The Governor’s position is that he is not aware of anything untoward having happened in the past or indeed of anything that occurs at the present time relating to National Front activities within the Prison. Minority groups of any kind or colour are not known to have suffered because of National Front membership or affiliation on the part of Prison Officers…”

By now, however, even the prison chaplains are writing to the Governor, “very distressed about reports in Sunday’s Observer of the activity of the National Front in Strangeways Prison, particularly as the policy of this organisation supports discrimination against minority groups, which is illegal in British Law”…

One of the chaplains, Rob Greenwood, writes his own letter “to signify my unease at the presence of a considerable body of staff who subscribe to the views of the National Front. It is in my view a potentially dangerous sign which we should not ignore…I should at least register my concern…”

In response, the Strangeways Prison Governor writes to Establishment Division 3, complaining that local Rabbi Wachmann of the Holy Law Synagogue, who was one of the signatories of the chaplains’ letter, revealed its contents to the Manchester Jewish press, stating that it “seems to come close to contravention of the Official Secrets Act, and how “remarkably indiscreet” it was.

The Governor also sees nothing “sinister or unusual” about prison officers wearing the NF union jack tie pin… “I must confess that it was not until recently that I learnt that the Union Flag in the form of a tie pin is used as the emblem of the National Front..should I now forbid the wearing of this tie pin?” (by 1977 the tie-pin is banned).

Further on in the letter the Governor writes “I have had only one complaint from a Jew concerning a remark allegedly made by an Officer…I am taking action to have the prisoner charged with making a false and malicious allegation…We have a Jew on the Board, and I have suggested the Chairman may wish to discuss privately with him…”

“I cannot tell you how disturbed I am at this information about members of the National Front being so well organised in Strangeways Prison. It is inevitable that Pakistanis from my constituency go there from time to time, and I am extremely disturbed that they should be dealt with by avowed members of the National Front…I know you will understand that these matters can have an enormous impact on race relations…”

In a memo concerning a feature on Granada TV to the Governor of Strangeways by Assistant Governor, D McCall, he cites ex prisoner, Vince Taylor, who spoke of prison officers putting stickers over black people’s cell doors with the slogan ‘Niggers Beware’…but the Governor subsequently writes to the Home Office denying any knowledge of such stickers.

A report at the time in West Indian World by journalist Stephen Bulgin, titled The Prison That’s Run By The National Front, alleged that one newly arrived prisoner who tried to remove such a sticker was kicked and had his head slammed against the door.

Also on the Granada programme, Rhys Vaughn of the NCCL (National Council for Civil Liberties), calling for an independent inquiry, accused a “certain number of warders inside Strangeways Prison, who discriminate against certain of the coloured black prisoners and Jewish prisoners. For example, they walk up behind them in a Nazi fashion, they say remarks about their colour, or their racial origins, they deprive them of certain liberties that they have inside the prison…We’re satisfied now that there’s enough evidence of discrimination against certain of the prisoners by prison warders, many of them we know to be supporters or members of the National Front…”

A 1977 picket of Strangeways by almost one hundred people concerning National Front activities within the jail was dismissed by the Governor in a report to the Home Office…“There was some half hearted chanting…It was a bright, sunny afternoon, but all the demonstrators looked thoroughly miserable. Not a smile or happy face was to be seen” he writes.

In July 1978, people who were horrified by the reports of NF activity inside Strangeways, took matters into their own hands and organised a huge rally outside the prison, before the start of the Northern Carnival Against Nazis… 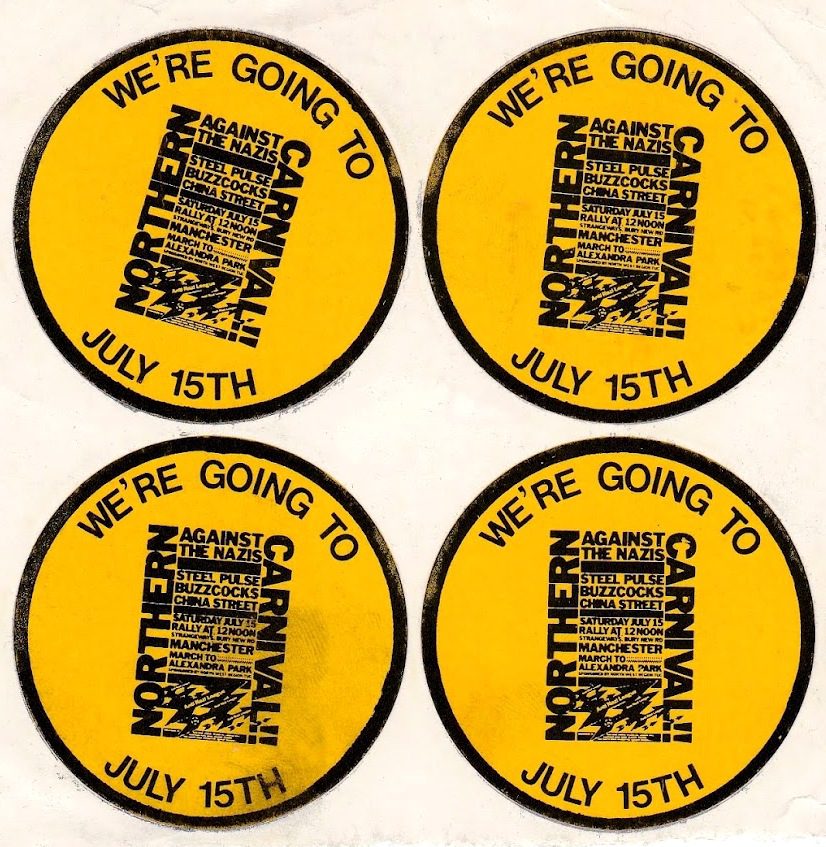 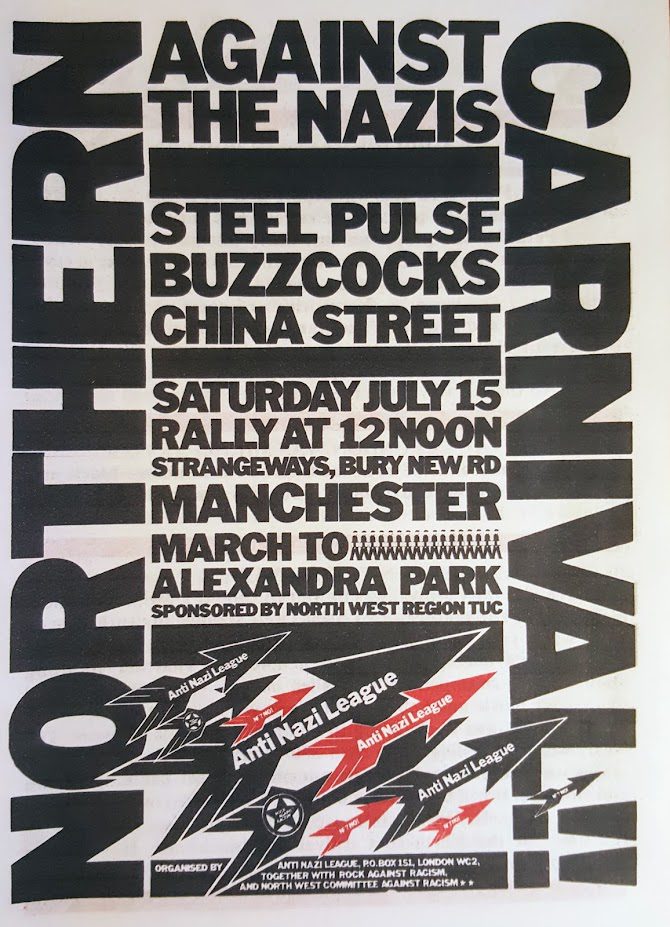 “After the excitement of the first big national Carnival Against The Nazis in London, in April 1978, which drew hundreds of thousands of people, it was decided to hold a similar event in Manchester” recalls Geoff Brown, local organiser of the Anti-Nazi League

“We met with Colin Barnet who was the secretary of the North West TUC, a serious anti-fascist who agreed that we should have a carnival and mobilise for it, and it was he who suggested starting at Strangeways. It was then not as built up as it is today and it was an open car park free to the public. We had a team, including Salford University students, Richard Bundy and Al Franco, who went down there at 6am telling people ‘You don’t want to park here today, we’ve got thousands of folk turning up for our Anti-Nazi rally’; and they did turn up in their thousands; up to 10,000 people spilling alongside the prison and in front of the main gate down to Bury New Road.

“But before they marched what for me was really moving was the reaction of the prisoners” he adds “They all get to whatever windows they can and make as much noise, cheering people who are getting ready to march off. It’s a moment that needs to be treasured. A disproportionate number of the prisoners are black, and the record of the National Front in prisons is terrible.”

“Collette was a youth worker in an adventure playground in Broughton and some of the kids she was working with had elder brothers in and around the NF, around Sussex Street” Geoff Brown adds “She persuades them to walk across to Strangeways, where they jump on the wagons with bands on the back and for the first time in their lives they’re in a place with large numbers of black kids. When someone tells the crowd that the biggest number of NF members is the warders in the prison behind them, a lot of these kids have family inside and it really shifts them politically.”

The cavalcade from Strangeways moves across town to Alexandra Park, where a further 25,000 people are gathered to see bands like Steel Pulse, the Buzzcocks and China Street play.

What did the Northern Carnival Change?

Joint organiser, Bernie Wilcox of Rock Against Racism, described it as “The day it became cool to be anti-racist”, as people chanted ‘We are black, we are white…We are dynamite!’…

“You had two huge Anti-Nazi Carnivals in London, you had Rock Against Racism gigs taking place in all kinds of clubs and odd places” he explains “And there’s a roll, a real confidence that persists to the point that the NF as an organisation fails in its objective to be Britain’s third party in the 1979 General Election. But they come back – the BNP, EDL and all the rest of them, so it was never a one-off thing.

“However, every time they try to make a comeback, the numbers of people who are willing to stand up say ‘No’ is already substantial because you have a track record and a network of people who have an anti-racist past” he concludes “Black Lives Matter was great – we had two hundred people in the car park behind Prestwich Precinct – but it’s important to see that it has a pre-history…” 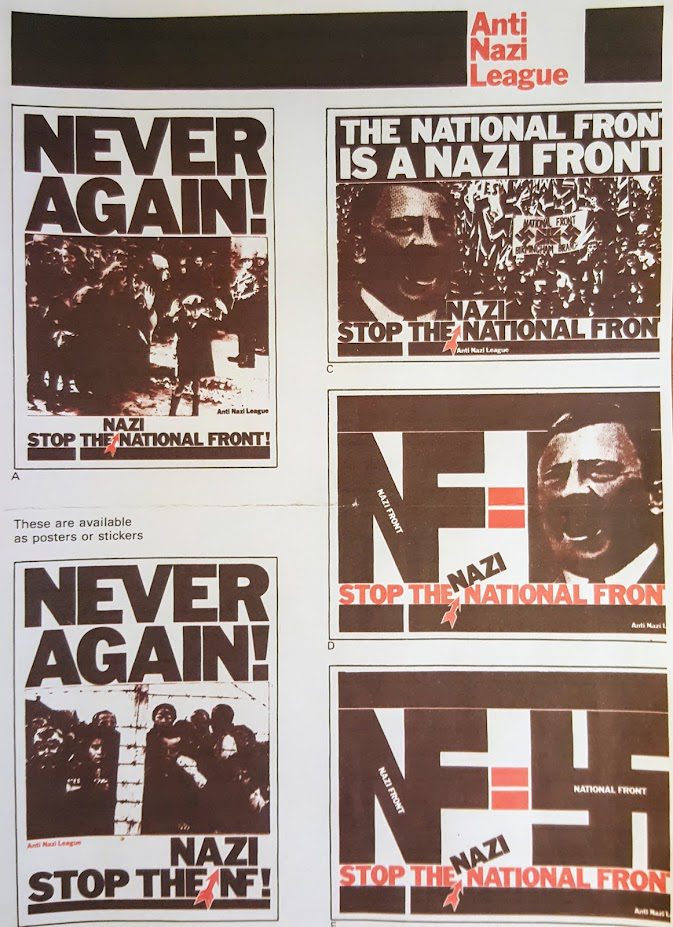 The Day It Became Cool To Be Anti-Racist