Memories of Nico In Manchester

Interview with James Young author of the brilliant on the road biog, Songs They Never Play on the Radio

James Young played keyboards and arranged tracks for Nico during the time she spent in Manchester, and his subsequent book, Nico: Songs They Never Play on the Radio, has rightly gone down as one of the best music memoirs of all time. Funny, acerbic and definitely real, Young strips away the Nico glamour and tells what she was really like as she toured the world with a band of well worn, scagged up musos and ‘Dr Demetrius’, or Alan Wise, leading the way… “Demetrius had pulled us together from different corners of his life, expecting some sort of golden alchemical reaction. But we remained a bunch of base metal misfits, hitching up our rusty wagon to Nico’s celebrity in the hope that it might take us somewhere, anywhere…”

Nico, at this point, is described as having “eyes like a map of hell”, while playing “music for a torn hymen”… “the long blonde hair of the Chelsea Girl was now a greying brown, her facial skin puffed  and slack, her hands and arms scabbed and scarred by needletracks, and her eyes like a broken mirror…She had simply traded in her previous glamorous image for something altogether more unappealing. Yet she didn’t seem to care…”

Young’s book, first published in 1992, was re-published by Bloomsbury Press last year, such is its popularity, so why does he think it keeps being rediscovered. Obviously it’s funny and brilliantly written but does he think it’s the ongoing allure of Nico?

“Songs They Never Play On The Radio seems to have a life of its own” he agrees “I think I wrote it with the idea that even if you’ve never heard of Nico it might still be an interesting read. When the book was first published in the early 90s Nico’s star was not as bright as it is now. Rather than the extraordinary and complex woman I worked with, she seems to have become attractive as an abstraction, a metaphor for whatever dogma people want to load her with.

“The reality is they still never play her music on the radio…well maybe a recording with the sainted Velvet Underground, or a track from Chelsea Girl that was written by one of her singer-songwriter pals…but the hardcore Nico stuff, her own compositions, never. I wonder if the allure of which you speak exists in the excitement people derive from projecting their own needs, desires and fantasies upon her?”

Indeed, Nico is probably more known now than when she was pottering around Bury New Road, playing pool in the Foresters…there’s been the ace Nico Icon play by Stella Grundy back in 2006, the film Nico 1988 in 2017and The Nico Project play starring Maxine Peake in 2019, amongst others, all focusing on the time she spent in Prestwich. So, does James think Prestwich influenced her work and attitude during these years?

“Well, Nico was doing a bit of writing in her last phase when she lived at Moresby, Prestwich Park Road South. Writing a diary and slagging everybody off” he recalls “She was off the heroin and into booze which made her angry. She wrote some new lyrics for a concert, her final concert as it turned out, at the Berlin Planetarium. Good work, good music. We all thought this was going to be a new phase but she buggered off to Ibiza and I never saw her again.

“I don’t know if Prestwich was a direct influence” he adds “…Nico lived in her own world, in a slightly different dimension to everyone else. Her imagination was Gothic so the architecture, the Prestwich aesthetic would have been conducive to her creative work. But then she also worked on her songs in Viva Hoffmann’s bathroom in New York…”

What with The Fall, John Cooper Clarke, Alan Wise and Nico hanging around Bury New Road back in the day, why does he think Prestwich was such a centre of everything?

“Alan Wise said that that North Manchester was about creating and South Manchester was about marketing…I don’t know if that’s true” he says “I’m an Oldhamer by birth, and for me Manchester was and remains an incomprehensible big city. I’ve only lived in Manchester briefly, in St Ann’s Road, Prestwich with Alan Wise in 1975-76. It didn’t seem particularly creative then but we were just pissing about and signing on. In fact I was fed up and remember thinking ‘Well, nothing happening here’. So I left. A month or so later the Sex Pistols played the Free Trade Hall and the place exploded.

“Looking back I think there probably was something in that damp, gloomy, fetid atmosphere that was enriching; a hidden and rich fertile soil” he adds “I’ve read interviews with various artists and commentators of that period going on about how grey and depressing it all was at that time. But I think that might have been exactly what provoked people into doing something. I mean they weren’t lounging about twanging their guitars on the French Riviera were they?”

James Young: Nico Songs They Never Play on the Radio is now available via Bloombury Press 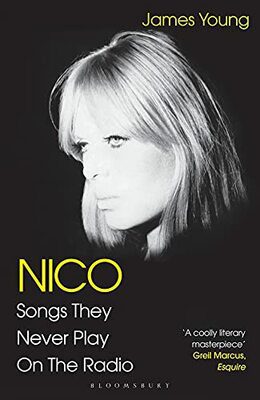 Nico: Who is she and what was she doing on Bury New Road – click here

Do you have any photos, anecdotes or memories of Nico in Prestwich? Please get in touch email: burynewrd@gmail.com or via Facebook: Bury New Road Heritage.