Prestwich Hospital and The Fall

The Fall co-founder, Una Baines, worked at Prestwich Hospital and Mark E Smith made lots of references to it in his work...

Back in 1977, Una Baines, co-founder of The Fall, was working as a student nurse at Prestwich Hospital, while she was living with Mark E Smith in their flat on Kingswood Road

“I used to come home from working as a student nurse at Prestwich Hospital and we’d go out for a pint, me and Mark and his mates” she told the Bury New Road project* “I would drink five or six pints and rant about the hospital so I think he picked up on it! It felt very liberating doing things like Repetition…”

‘This is the three R’s

They put electrodes in your brain

And you’re never the same

“You were 18 years old and seeing the horror of Prestwich Hospital – I think I was too young really to be working there because it affected me so much, all I could talk about was what was going on there” Una explained “I used to think it was a legalised concentration camp, a drug experimentation facility.

“The first ward I worked on was elderly ladies, and basically they were there because they had nowhere else to go” she added “‘Mentally ill’ was a very loose thing everyone was tarnished with but a lot of them just had anxiety and depression and who wouldn’t now be in a place like that.

“People who were allowed to come and go had hospital clothes that didn’t fit them, and they were drugged up” she said “You could spot someone from Prestwich Hospital a mile off. I loved working with the old ladies but they were all drugged up on Largactil, a knock out tranquilliser that stops people from thinking. They were supposed to have different illnesses but they were all on the same drug. I was off for one weekend and came back on and they’d all been put on a new drug, Haloperidol. They were just vegetating, whereas they could have had some quality of life. But they didn’t…”

Prestwich Hospital also features in Mark E Smith’s autobiography, Renegade… “We lived at the back of the mental hospital. Una worked there. Psychiatric nurses lived in every two or three houses. Biggest mental hospital in Europe; serious mental patients. I’d invite patients in for a cup of tea. Sit them down, play them some rock and roll, a bit of telly. Sometimes I think I did more good than all the nurses put together. They’d go out all cheerful.

“…I’d say to them ‘What are you in for Terry?’ or whoever it was, and he’d tell me his story of when  he was eleven and he’d nicked, like, two bob out of his mum’s purse, so they had him sectioned” Smith wrote “And there was one woman whose mam just didn’t like her. She shouted a bit too much: bunged in the mental home for fifteen years.

“Fellows in there from the 30s and 40s; some counsellor had just decided to label them ‘mentally ill’” he added “Or somebody’s father had died and their mam had married another fellow, who the kid didn’t like – this kid obviously going through puberty – and they’d be in there for fifteen years. Terrible.”

On his music references to mental health Mark said: ““I’ve always thought the most dangerous drugs are prescribed anti-depressants. They tried to prescribe me some, for my chest, to stop smoking. That was the final straw. Luckily, I’ve mates who know about pharmacology, as you can imagine…”

Many of Mark E Smith’s lyrics merge what goes on behind mental hospital doors with those who self-medicate with Valium, drink and illegal drugs, and the craziness of everyday life. We asked fans on the Facebook site Mark E Smith and The Fall: It’s Not Repetition, it’s Discipline to think of Mark E Smith songs and lyrics that they feel could refer to Prestwich Hospital and mental health…

Jonathan: “Dedication Not Medication is about psychiatric drugs…bed wet pills…”

‘And Pierce Brosnan how dare you prescribe

‘They’re putting me away but I’ll be back someday

Putting me away but I’ll be back someday

Prisoner for a year and a day

Putting me away but I’ll be back someday

A bust doorbell sound and the door broken down

A doorbell sound and the door broken down

They rang and rang but I never went down

‘Going down to the dance

Going down to the dance

The porter swears this is true

The porter swears this is true

And drinks too much in his brown and white hut

But the thing clings to the acceptance gate…’

Jonathan:  Psycho Mafia. Sure he said in Renegade it was about that. He named it after a gang he was in (apparently), but the song is about that…

‘Spit in the streets

Your heads and teeth

Our eyes are red

Our brains are dead

Going on about drugs

Paul: There’s a fair few references scattered throughout Dragnet. Quite obscure ones, obviously.

The moon came towards me

The moon came towards me…’

Tim: Athlete Cured doesn’t the guy undergo a course in a countryside gentrification clinic outside Dresden or some such?

From the hotbed of creation

Was in no pill.

The cure was in no pill…’

Claudia: “I think every Fall song’s a bit bonkers, and there’s a lot of them, so that’s a tough one…” 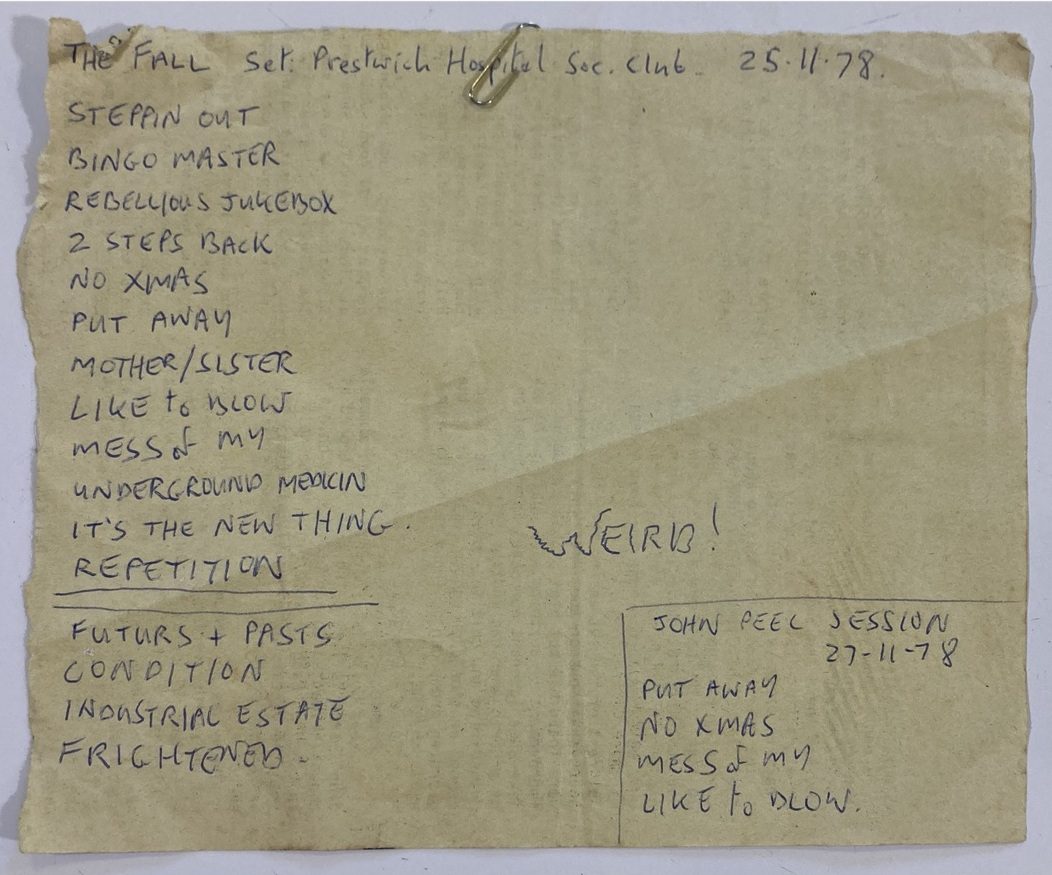