A History of Sport On Kersal Moor

From cock fighting to football, and from archery to horse racing, Kersal Moor has been at the epicentre of sport in Salford throughout the ages. Here, author Alice Searle, tells the tales...

From the 1700s, Kersal Moor has been an invigorating place, the home of sports, gambling and exciting but dubious recreation. I have read one 18th Century advert which announced that there was going to be ‘cock fighting’ every morning and an assembly, usually with betting, every night during the races. Betting during the two hundred years of the Manchester Races was very popular but eventually it was the activity which led to its downfall.

The Turf Tavern, on the corner of Oaklands Road, owned by the Clowes family, who also owned the Moor, did great business during these times and also provided sedate recreation on the bowling green at the back of the inn. By the 1800s however, some members of the Clowes family had become tired of the decadent behaviour on the Moor. The Rev John Clowes, and church goers like John Byrom, saw the Moor as a place of ‘drunken debauchery’ and forced the closure of the races for fifteen years. In 1846, Colonel Clowes decided not to renew the lease and the track moved, after two hundred years, to Castle Irwell.

Apart from the races, other sports were played on the Moor. Longbow archery was practiced there, and the Broughton, Cheetham and Prestwich Archers became nationally famous. Golf, long known as a sport of the aristocracy, was played for the first time on the Moor with wealthy businessmen, who formed the Manchester Golf Club, the second one in England. 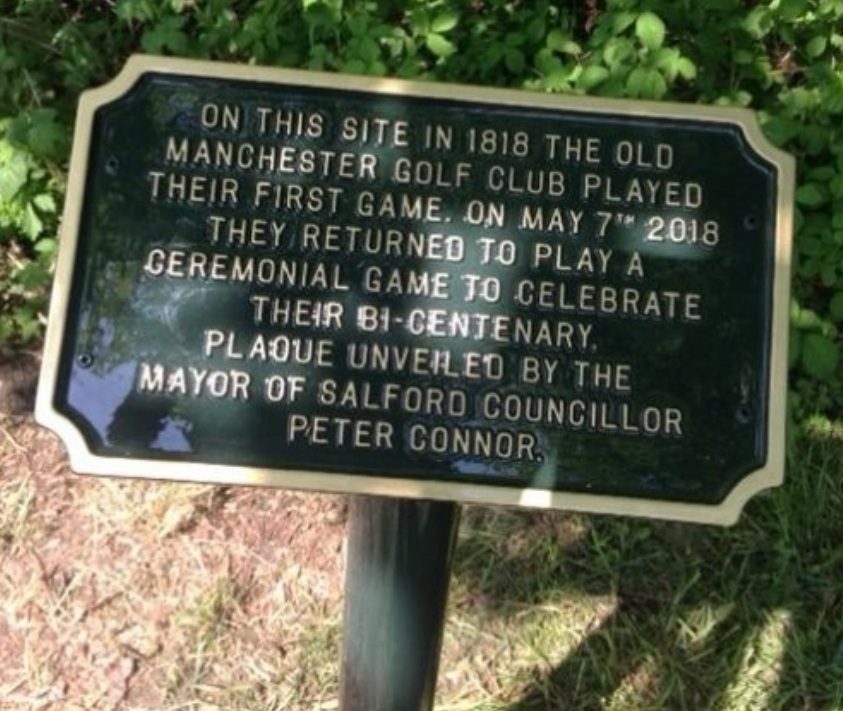 These two sports were exclusively middle and upper class pursuits, and pretty dangerous also for those just strolling on the Moor. With a quite different character, military reviews and spectacular parades were often held there, providing entertainment, although not sport, for the public.

A major change in ownership occurred in 1881, when the Clowes and Byrom Estates leased the land to the Salford Corporation for £63, which it generously returned. The Corporation was then responsible for maintenance of the Moor and for the control of the public misbehaviour. This was the situation for 55 years, with the Corporation organising sports on the south side of Moor Lane and simple leisure on the north side of the lane. During this time St Pauls Church (1852) and the original St Paul’s Primary School (1861) were built, giving the Moor importance and status.

The south side of Moor Lane was sub-divided into areas for tennis, archery, cricket and football. The football, at this time, was rugby. People wonder why the football was rugby football and not just football. A Rugby school boy called Richard Sykes, former captain of rugby at that school, brought the game to Lancashire, forming the Manchester Club in 1860. It played rugby football at Kersal from 1908, while the important English rugby trials were played there in 1921 and again in 1938 (see main photo), when thousands of supporters were transported ‘in charabancs’ from St Peters Square to the ground. The New Zealand All Blacks were also due to play there in 1924, but, unfortunately and disappointingly, this was transferred to Old Trafford.

It was around this time, in 1936, that the pressure of taxation forced the Clowes and the Byroms Estates to put the Moor up for sale. It was offered to the Corporation for £7,000. The residents believed the Moor already belonged to the Corporation and petitioned for it to be bought. They saw the Moor as a public ‘rec’ which was used for school games and sports days. It was a successful petition and eventually the cost was put on the rates as a mortgage for thirty years.

So by 1966 it was finally owned by the people of Salford. A councillor, JT Harrison, Chairman of the Committee, said the Moor was “an important lung and, when purchased, would be retained as an open space, and every effort to convert to any other would be unsuccessful”.

By public demand, the game changed from rugby to football and the popular Salford City Football Club came to be based on Kersal Moor…

Alice Searle is the author of two books about Kersal Moor – A Celebration of Kersal Moor and More Moor Tales.

Kersal Moor: What is it? Where Is It? Why Is It? – click here