Death in the Pavilion…

The Moor belonged to the Clowes family until 1888 when Salford Council took over its management. It then became a quite different site, no longer the Racecourse which it had been for two hundred years. The Council wished it to become a place of leisure with the north side of Moor Lane, being a recreation area.  For the benefit of the walkers, a drinking fountain was established. There was a urinal also, but nothing for women!  To give it a really leisurely look a bandstand or pavilion was erected, which was eventually burnt down.  However, before this, a really sad incident occurred.

Edward Laffa, from Pendleton, was sitting in the sun house and heard a man moaning from the opposite side, asking for help. When he looked, he found a man, Arthur Young from Broughton, trying to commit suicide but he couldn’t use the gun he held. He said he had been lost since his wife had died and wanted to end everything.

Sadly, when Laffa rushed back with the police, they found the man, sunk over and quite dead. He carried a letter for his  daughter Martha, ‘From your broken-hearted Dad.’ The daughter Martha was found in Crumpsall Hospital, where she had been for 32 years! What a very sad story.

One wonders if poor Arthur was looking for his daughter as he wondered the Moor and if his sad, weary body still wonders there now-a-days. Suicide was then a sin so he wouldn’t be buried in the church yard near where he died. The pavilion then became a place to be avoided and maybe that was why it was finally burnt down, to rid it of ghosts. A sad, but not an angry ghost…

Three hundred years ago there was also a rather macabre event  on Kersal Moor, but what some people, at the time, saw as a just act and even an exciting act! This was the hanging, on the high point of the Moor. In 1787 a well -known Irishman called John McNamara, previously charged for political offences, escaped to England. In order to survive he began his criminal activities in the area of wealthy merchants, which, at that time, was North Manchester. With his gang of robbers he was caught stealing from the wealthy Cheetham House. This theft consisted of three waistcoats, two silk handkerchiefs and £8 in cash. His political reputation, as well as the value of the theft, was sufficient to condemn him and there was a determination to make an example of him. The event was widely proclaimed and created excitement.

On the day of the hanging, people lined Bury New Road all the way to Kersal.

He left the New Bailey jail, sitting on his own coffin, in an open cart. The gallows had been erected on Sandy Hill, standing high over the sandy hillocks. This gallows was guarded by soldiers overnight, with immense crowds assembling from early on the day. Families even came with picnics and were ready to hold their children high at the crucial time. Although it was intended to be an example to deter burglaries, it was rumoured that ‘pick-pockets’ were ‘working the crowd’ that day. The goriness of the hanging was thoroughly enjoyed; as we may say, ‘a good time was had by all’! The body was allowed to hang there for some days, to reinforce the message. The Moors’ magpies circled the hanging body and the Moors’ foxes slinked by with hungry glances.

If today, you climb Sandy Hill you will find two rustic benches, back to back and looking out across Salford and towards Bury. These were built in 2017 by Friends of Kersal Moor, who after building them celebrated with a picnic. The macabre subject of the hanging of John McNamara was not dwelt on but briefly remembered as one of many interesting scenes in the history of the Moor. So, if you should take a rest on these seats, perhaps think of modern day justice and whether we have moved on, or not? 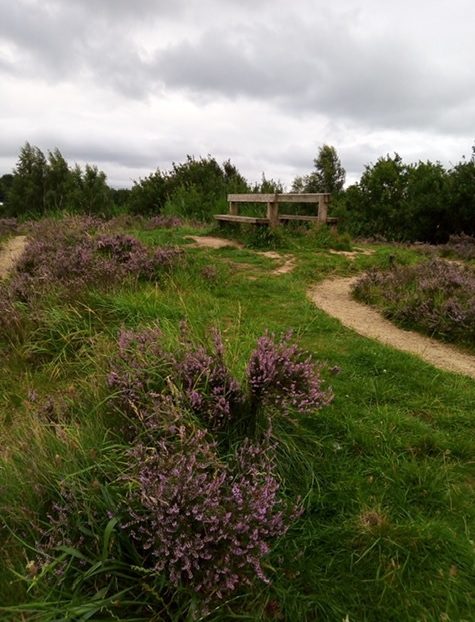 Alice Searle is the author of two books about Kersal Moor – A Celebration of Kersal Moor and More Moor Tales.