The Rialto – My Time At Pinky’s By Carl Mundy

‘You could guarantee a fight every night!’

“I started off pretty young as a doorman at Pinky’s, when I was 17, and ended up owning it with Mike Martin. This was in 1982 and 83, when it was a notorious night club. Back in those days it was  a really rough club because you had Lower Broughton going in it and Higher Broughton, and at that stage they didn’t quite gel with each other, if you know what I mean…You could guarantee a fight every night!

“It was a bad place but it was also really good because it was all Salford people who went in and that was the main night club. Everyone in Salford went to Pinky’s because it was the only club around here, and was known all over.

“Pinky’s was really the Broughton Assembly Rooms, and when I was ripping the maple floor up it had all the motifs with Broughton Assembly Rooms put into it. It was a shame the floor was so rotted. It went from being Pinky’s to Changes, and when Changes shut down and it went to Hoopers which I had, then to Valentine’s, and that was the last name before it got shut down for, er, reasons.

“There was a place next door, Potters Snooker Club where Alex Higgins used to go. Sometimes I used to do the door and ended up playing him. I was at the table for about three or four seconds. You had no chance, the man was a genius. At the time Potters was going there as a guy called Mike Lomas who owned it and John Virgo and everyone used to go in there and practice. 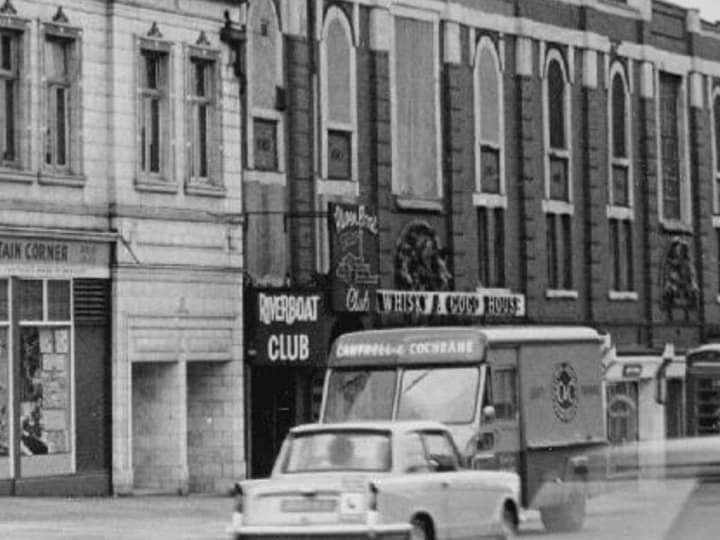 “But they changed that into a night club as well. There was all sorts in that building – Whisky A Go Go was between Potters and Pinky’s, and after it shut it re-opened as a roller skating rink which turned into a into a piano bar called Carringtons; a smooth place where you could take your girlfriend. But it didn’t really last that long.

“Before I got Pinky’s, Changes and Valentines, I was working on the Rialto as a builder, so I was working on the roof and it had cherubs on the outside of it. It was a shame it came down because it was a landmark. When I was younger I used to go there, called the ABC minors .

“It’s hard to imagine it now, because it’s got a McDonalds there and there’s nothing historic about it, but it was an historic building; it was a nice looking building. I was heartbroken when it went as I spent most of my youth, early teens and adulthood there, and met my wife there. I employed her as a bar maid and we’ve been together 36 years.

“The Rialto meant a lot to a lot of people. It had the cinema, the shops, a pool hall downstairs, a snooker club upstairs, a roller skating rink, a night club, a piano bar, everything going on there…Before the nightclub opened at night, we used to go to a wine bar called Hamilton’s on Bury New Road, near the old George pub. We would also go to the George, then the Grapes, Wilton, Masons, the Grove which were all on one stretch, and the Railway and Naturalist…”

Carl is now the landlord of The Railway and Naturalist pub on Prestwich Village – ‘the cheapest pub in Prestwich’ – while Tracey, his wife of 30 years, is the licensee. The pub is again historic and iconic as the meeting place of the 19th Century naturalists, who were the first artisan botanists. Built in 1850, it became the Railway and Naturalist in 1879 when the railway came through. Unfortunately, apart from a sink in the basement, some built in cupboards upstairs and the building itself, there’s not a lot left of the original decor.

“They can’t take this pub down but in two years time all this is going to be different because everything at the back is going” says Carl, referring to the Precinct ‘regeneration’ “I think Prestwich is coming up, it’s the place to be if you don’t want to go into Manchester.

“I’m disappointed with the Council, as, come Christmas, they don’t decorate anything but it is the centre of everything, with the motorway, tram station, and the route to Manchester centre” he adds “I would have thought they would have made Bury New Road a one way system going down to Manchester and Bury Old Road coming back. At night, you can’t have the windows open in the pub because of all the traffic off the motorway into Manchester.”

However, The Railway and Naturalist has survived and thrived…unlike The Rialto, which still riles Carl… “Every time I go past there I shake my head and think ‘What a shame’…”

“I was born in the foyer of the Rialto!” – click here